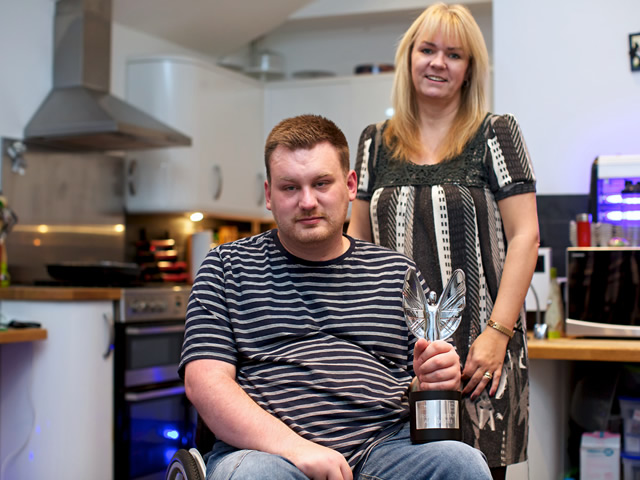 A man who was left paralysed after being hit by a car and thrown from his bike received a seven-figure compensation settlement.

A man who was left paralysed after being hit by a car and thrown from his bike received a seven-figure compensation settlement.

Daniel Black, of Chepstow, was just three days away from joining the Army when the life-changing accident happened.

He had been cycling to work when the car pulled out into his path, causing him to suffer a spinal cord injury which left him paralysed from the chest down.

He also suffered a brain injury and a stroke, resulting in him spending six weeks in a coma, and causing loss of function in his right arm.

Daniel, now 27, had reflective strips on his clothing and lights on his bike at the time, but insurers for the driver, who did not face criminal action, claimed they had not been clear enough, arguing for a reduced compensation pay-out.

Court proceedings were issued in the High Court before the seven-figure sum was awarded, and Daniel has since been able to use his compensation to buy an adapted house and vehicle for his needs, as well as meeting the costs of round-the-clock care, which he will need for the rest of his life.

“The defendant’s insurance company tried to reduce the compensation that they were liable to pay and they argued, amongst other things, that Daniel’s bicycle lights were inadequate and that he was not wearing high-visibility clothing at the time of the accident,” said Kent Pattinson, a specialist solicitor who deals with catastrophic injuries on behalf of Hudgell Solicitors.

“However, after fighting hard for Daniel in terms of the settlement he received, including issuing High Court proceedings, we were able to recover a significant amount of compensation for him which has helped him make some major changes at home to live with the life-changing injuries he suffered.”

Although Daniel still faces a life of difficulties, his mother Michaela said the support of Mr Pattinson had helped them not only legally, but also emotionally, through the toughest of times for their family.

“Kent went above and beyond what I would have expected from any solicitor,” she said.

“He would phone us at 8pm on a Friday night and I would say ‘go home’. Nothing was too much trouble and he was always at the end of the phone.

“Without him, it would have been even harder and even more emotional, but he took that away. The stress is always going to be there, but he was a filter for the stress we were going through.”
Daniel is now hoping continued medical improvements will help him to walk again in time. He currently lives with his parents, Richard and Michaela, as well as his carers, as he awaits further scientific developments.

“There are some people in my situation who wouldn’t change anything and wouldn’t go back to the way they were, even if they could. They have adjusted really well. But I’m the complete opposite.
I just wish science would hurry up and I wish it could fix things,” he said.

Daniel’s father Richard says watching his son go through the life-changing accident has taken its toll on the whole family.

“It has been life-changing, isolating and lonely,” he said. “It’s hard. Daniel used to be fit and healthy, and did all the things boys do, but in one second, that was all taken away from him.

“If the research carries on, Daniel could be walking by the time he is 40. It’s a waiting game. He hasn’t been waiting as long as some people, but even not being able to walk for a week feels like a lifetime.”

Daniel had initially started raising funds, alongside his family and friends, for his own pioneering stem cell therapy, which is still in the research and trial stages.

However, he hit national headlines in 2013 when he donated every penny he had raised towards his own treatment – £22,000 – to six-year-old Brecon Vaughan of Mathern, Chepstow, who had cerebral palsy and needed £60,000 for pioneering treatment in the US to help him walk.

Daniel, who now undergoes regular physiotherapy, was touched by the youngster’s plight and his selfless act resulted in him being awarded a Pride of Britain award, presented to him in front of a packed celebrity audience and screened to the nation on ITV.

“I thought it was a joke at first,” he said, recalling a phone call from the Daily Mirror to say he had won.

“I heard there was treatment available for Brecon to walk and all he needed was money. I had money but the treatment wasn’t yet available, so I would have been selfish to keep it as he needed it more than me. I just handed the money over and didn’t believe it was worth any recognition.”

“His mum and dad were pretty impressed because they knew their son could walk again. I felt happy to help and I’m glad I helped to make a difference.”

Brecon is now able to walk unaided, but with intense physiotherapy two to three times a week.

Daniel’s father Richard said he could not have been prouder of his son when he won the Pride of Britain award.

He said: “On the night, I went up on stage with him. It occurred to me that while we were all sat watching people going up to get their awards, everyone was standing and clapping them. Daniel was sat down and couldn’t see anything, but to me, he is still a giant amongst men. I’m so proud of him.”