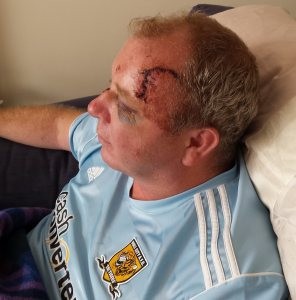 A cyclist who suffered a fractured skull and was left blind in one eye when hit by drunk driver is being supported by Hudgell Solicitors as he adapts to life with his injuries. Raich Carter – son and namesake of the former Hull City footballer and manager - was knocked from his pushbike by a driver who was nearly three times over the drink-drive limit.

A cyclist who suffered a fractured skull and was left blind in one eye when hit by drunk driver is being supported by Hudgell Solicitors as he adapts to life with his injuries.

Raich Carter – son and namesake of the former Hull City footballer and manager – was knocked from his pushbike by a driver who was nearly three times over the drink-drive limit.

He was left bleeding in the road and drifting in and out of consciousness, having suffered a fractured skull and broken ribs. He lost his sight in his left eye as a result of the accident, due to the damge caused to his optic nerve.

Hudgell Solicitors secured urgent intervention in the case, ensuring rehabilitation costs were covered by the insurers of the driver as part of a claim for damages.

Solicitor Jessica Gower said: “Mr Carter suffered life-changing injuries at the hands of an irresponsible driver who simply hit him and left him at the side of the road without a second thought.

“Mr Carter has not yet been able to return to work and the injuries he has suffered will impact on him for the rest of his life.

“Whilst no amount of money will ever be as valuable as the sight he has lost, we are seeking damages which will reflect the impact this accident has had on his life, the financial losses and the psychological damage he has suffered.”

Mr Carter, 46, of Hull, previously worked as a supply teacher, and admits to being conscious of his changed apperance following the hit-and-run incident.

His face is scarred and he still continues to suffer from pain as a result of suffering a frozen shoulder, and has repeated headaches and dizzy spells.

“It’s all ifs, buts and maybes, but if I had set off five seconds later, maybe it wouldn’t have happened,” he said.

“I have had to adapt to living with sight in only one eye. It impacts on everything you do, even things as simple as pouring a cup of tea can be difficult as it is hard to judge distances. I’ve had to rely heavily on my fiancee, Jane, to look after me. I now live with her in Hull and she has been wonderful.

“Physically, it does affect your confidence out in public. You do become aware of looking different, and given my work in schools as a supply teacher, it is a concern as I know any teacher who looks a little different is soon given a nickname by kids, it was the same in my day.

“I was also fairly active and have always played cricket, golf and football. I’d started cycling as I had recently stopped playing football and wanted to make sure I stayed fit.

“I used to go home and away watching Hull City too, as my father first took me when I was three, and I have travelled all over watching them since I was 13, but this year I have just gone to the home games, as I wouldn’t feel comfortable going into the environment of an away game.

“I am really grateful for the support I have had in my rehabilitation.

“Everything has been done to the finest detail, and in essence I am getting double treatment because Hudgells are sending me through their own independent medical experts including eye clinics, physiotherapy and psychological assessments and treatment,” he said.

The driver, who was jailed for two years for causing seroius injury by dangerous driving, failed to stop at the scene.

“It angers me to this day that she didn’t stop,” added Mr Carter.

“She knew she had hit me and that I was in a bad way. Anything could have happened. I could have been left there to die, or perhaps even hit again by another vehicle. She didn’t show any concern for me at all. I can never understand how somebody could not stop having hit someone.

“My safety helmet saved my life, of that I am certain. It cost me £18 and is probably the best £18 I have spent in my life.

“It was completely smashed to pieces, but it did its job and I would have died had I not been wearing it, I am sure of that. Many people still don’t wear them as it is not compulsory, but it saved my life and I hope any cyclists reading this who don’t currently wear one change their ways.”

Mr Carter hopes his case will again highlight the dangers of drink driving, and how one big mistake can ruin not just the life of the victim, but also the offender and their loved ones.

“The problem is that a person heavily under the influence of alcohol isn’t making the right decisions anyway. People shouldn’t put themselves in that position if they are going out drinking, they should simply leave their keys at home, or take the car home before they drink. Friends should also take responsibility for their mates and take their keys off them,” he said.