A man whose dentist left him with his baby teeth into his twenties – preventing the development of his adult replacements - has been awarded damages following a legal case.

A man whose dentist left him with his baby teeth into his twenties – preventing the development of his adult replacements – has been awarded damages following a legal case.

Guy Jackson lost the majority of his baby teeth when he was a child, allowing his adult teeth to come through as normal.

However, both of his upper left and right canine baby teeth remained in place and were not removed by his dentist.

This has led to him now facing the prospect of prolonged treatment to bring his adult teeth through, as he has been told they may be fused to his jaw.

Mr Jackson, now 26, said his mother first raised concerns with his dentist, Dr Carl Bergin, who then practised at Bergin Family Dental Practice in Beeston, Leeds, when he was 10-years-old.

His mother questioned when his remaining baby teeth would fall out, but was reassured by Dr Bergin and trusted his judgement that no further action was needed.

In 2013 however, at the age of 22, Mr Jackson was left with a gap when one of his baby teeth broke and needed removing, as the adult replacement had not been able to develop as it should.

He is now facing the loss of his second baby tooth, which has recently become wobbly, and fears he will be left with a second gap.

Treatment was ‘below standard of a reasonable dental practitioner’.

An independent expert, consulted as part of a legal case led by medical negligence specialists Hudgell Solicitors, said Dr Bergin failed Mr Jackson on various levels between 2001 and 2013, and that the treatment he received was below the standard expected of a reasonable General Dental Practitioner.

The expert said that had Mr Jackson had his baby teeth extracted when he was about 10, it could have increased the chances of his permanent adult teeth coming through in a more favourable position by 80 per cent.

Even had that not happened, the expert said further treatment should have been undertaken at the age of 12 or 13.

He said: “I don’t like to show my teeth when I smile and it’s really affected my self-confidence throughout my life. In most of the photos that have been taken of me throughout my childhood and into adult life, I’m not smiling.

“It’s taken such a long time to sort out, and he left a piece of the root in when he removed the first baby tooth, so that was a mistake too.

“The dentist didn’t listen to me and said I was too old to have braces on the NHS when I was 15. I think if I’d had braces, I would have had a nice smile before I was 21, so I feel let down.”

Mr Jackson is now about to have braces fitted on the NHS and undergo further treatment in a bid to bring his adult teeth down in line after years of discomfort.

However, there are no guarantees the adult teeth will not be fused to his jaw, as this risk increases with age, and he has been warned the late intervention may not be successful.

Although Dr Bergin’s representatives did not formally admit liability, they agreed to seek an “amicable settlement” in the claim, resulting in £9,000 damages being agreed with Mr Jackson.

As part of the claim it was alleged Dr Bergin did not make any reference to Mr Jackson’s two remaining baby teeth during any examinations between 2001 and 2006 and, despite numerous X-rays, it was only noted that his permanent teeth had not yet come through in November 2006, when he was 15 years old.

Further reassurances from Dr Bergin came in 2008 that no further action was required and 2013 saw one of Mr Jackson’s baby teeth break, which was removed.

It was alleged Dr 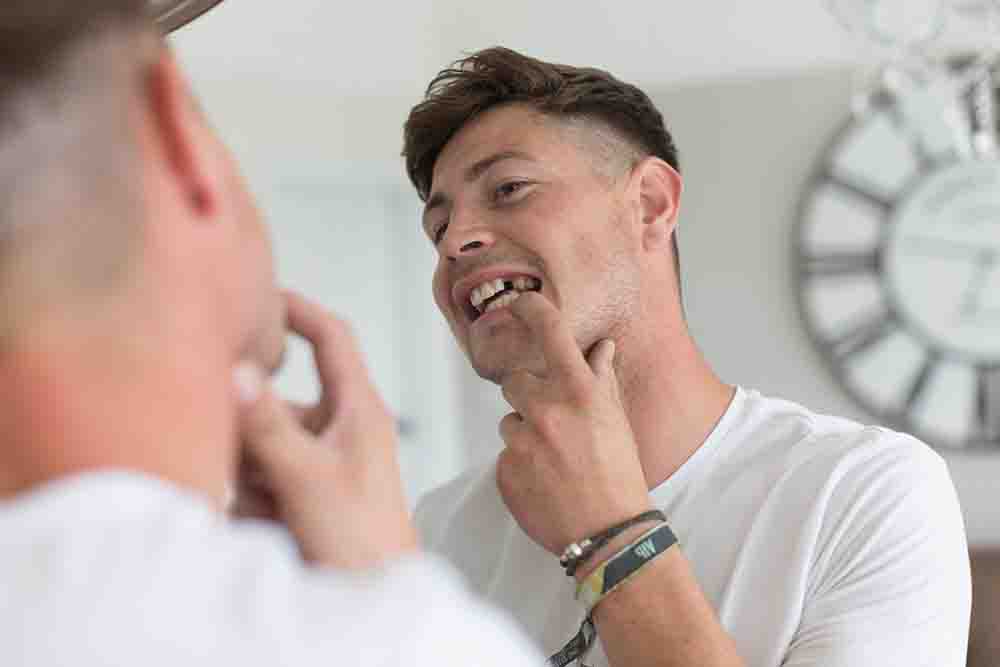 Bergin failed to become suspicious of the potential problem when Mr Jackson was 10 or 11 years old, failed to note his adult teeth were not coming through at appointments in 2001 and 2003, and failed to refer him for further treatment in January 2003.

It was also alleged that, despite regular check-ups, he failed to recognise and record that Mr Jackson’s adult teeth had not come through until 2006, failed to refer him to an orthodontics specialist for further treatment to be considered at the age of 11 or 12, and incorrectly advised Mr Jackson’s mother that the need for referral was not necessary when X-rays showed the teeth hadn’t come through in 2008.

Mr Jackson, who regularly visited the dentist for check-ups, said he has always taken good care of his teeth and was shocked to find himself in this position as his whole family used and recommended Dr Bergin for many years.

He said: “We all went as a family – my grandparents, parents and sisters. You put your trust in these people and if the dentist says your adult teeth will come through, you believe they will come through.

“I always thought he was a good dentist and I didn’t realise how wrong I was until I was older. It’s been a nightmare and I just want to be able to smile with confidence.”

Invasive dental treatment could have been avoided with appropriate care

Rachel O’Connor, of Hudgell Solicitors, dealt with Mr Jackson’s case and, said: “This is a case in which basic dental care has not been provided and it has had a lasting impact on our client.

“Your smile is one of the first things that people notice when they see you and, as a young man growing up it must have been really difficult, especially in social situations.

“Mr Jackson now faces having to undergo invasive treatment that will take, at the very least, six months longer than it would have had the treatment taken place when he was a child.

“In the interim period, he has suffered embarrassment due to the cosmetic effect of having his baby teeth on show rather than his adult teeth.

“He previously enquired with a different dentist about the treatment options for his teeth but was told it would have to be on a private basis, and that was not something he could afford at the time.

“Mr Jackson now has the opportunity following his case to be under the care of an orthodontist he trusts and have the treatment he has wanted for years without the fear of being unable to afford it.”

Mr Jackson said he would recommend Hudgell Solicitors and was pleased with the way his claim was handled.

He added: “It was a long process because it was detailed, but we got there and Rachel was really good. She kept me in the loop all the time and has got the outcome I wanted.”