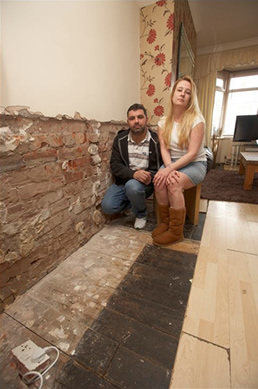 A Hull couple who have endured four years of living in damp conditions are celebrating after winning a lengthy battle with their insurers for damage to their flood-ravaged home. Simon Moss and his partner Louise Fletcher’s home in Parkfield Drive was damaged following the catastrophic flooding in the city in June 2007 when 100mm of rain fell in just 24 hours and some 9000 homes were flooded.

A Hull couple who have endured four years of living in damp conditions are celebrating after winning a lengthy battle with their insurers for damage to their flood-ravaged home.

Simon Moss and his partner Louise Fletcher’s home in Parkfield Drive was damaged following the catastrophic flooding in the city in June 2007 when 100mm of rain fell in just 24 hours and some 9000 homes were flooded.

Although they didn’t suffer directly in the floods, large parts of their house soon became riddled with damp in the months following the floods, forcing them to live in damp conditions.

But now the couple’s misery has finally ended after securing an £8,000 compensation pay out following a legal battle which Simon refers to as a ‘David versus Goliath’ case.

Simon is now looking forward to repairs on the house being completed so that he and Louise can put the years of “nightmare” behind them.

Simon explains: “Just after the floods, we became aware of damp affecting many parts of our house.

“It soon became apparent that whilst we thought we’d managed to escape the worst of the flooding at the time, there was longer-term damage to our home. The joists under the floors, and the floorboards, needed urgent attention.”

Simon believed the urgent repairs needed to the couple’s house would be covered by his insurance policies and costs would be quickly recouped.

However, their insurers Certain Underwriters at Lloyds denied the claim – stating that the damp problems under the house were due to poor ventilation and longstanding failure of the damp proof course. They concluded the real reason for damage through damp was inherent defect and not the floods. The insurers relied on evidence from an engineer who visited the property in January 2009.  In his report he felt the damp proof course had failed and the damp was a long standing problem.

Disappointed by this outcome, Simon instructed his own expert who did an inspection in June 2009.  This expert was supportive of the claim of secondary flooding but the insurance company still refused to make any payout.

In October 2009, Simon approached compensation specialists Hudgell Solicitors who pursued the matter which ended in the courts. Now the couple have won the case, with Hull County Court deciding that on the balance of probabilities the floods caused secondary flooding to Simon’s house.

The court also ordered that the insurers paid damages in respect of flood damage which should have been paid when the claim on the policy was made in 2008.

Simon adds: “The last four years have been a living nightmare for us. We haven’t been able to touch anything that needed repairing until the case was settled and so we’ve had to live with ripped up flooring and peeling walls. It hasn’t just been depressing for Louise and me to live in these damp conditions, it’s been extremely embarrassing when friends have come round and seen the house in such a shabby state.

“It’s been a long journey and one that at times has been extremely time consuming and emotionally draining. When we first decided to take on the insurance company’s knowledge and experience it felt like a case of David versus Goliath.

“But I firmly believe it has been worth the fight and this is clearly a victory for common sense over bureaucracy. I just hope that now the case has been settled we can get on with the repairs quickly and put all this behind us.”

Andrew Petherbridge, professional negligence specialist at Hudgell Solicitors who handled Simon’s claim, comments: “Although there is no doubt this has been a long hard fight, it is the right outcome.

“All too often people can accept rulings made by insurance companies at face value instead of challenging them. Simon’s case is clear proof of what can be achieved with the patience and perseverance of clients, backed by the knowledge and expertise of our team of professional negligence lawyers.”

When Hull was deluged by unusually high volumes of rainfall in June 2007, it was estimated that it was a one in 150-year event. The torrential downpours resulted in severe flooding and widespread disruption, with damage to more than 8,600 residential properties and more than 1,300 businesses.

"Very impressed with the fast turn…"

Very impressed with the fast turn around of Hudgell. Very responsive and friendly too.

Wonderful service, was kept up to date regularly and once they received an offer to settle my case, they advised that they could get a better offer and did just that, will definitely pick up the phone again if I ever require their services in future.

"These solicitors were very helpful and…"

These solicitors were very helpful and I was surprised when they told me that they were pursuing a totally different avenue to the one I thought was available. They were very efficient, constantly in communication with myself and were direct with the opposite party. Needless to say, they won my…

"Take a leaf out of there book"

"Couldn’t of chose a better solicitors…"

Couldn’t of chose a better solicitors to go through my claim with, Sarah informed me every step of the way (even when they was nothing to update me with) was such a quick process and she couldn’t of been more helpful ! 5*

Alex is amazing! He took over my claim and everything changed from negative to positive. Case still ongoing but fantastic service so far from Alex. Great communication - answering calls and emails. Spot on in everything. I am very glad he is handling my case now and I am confident…

Excellent service and communication from start to finish. The whole process of handling my personal injury claim was dealt with quickly and courteously.

Becci was amazing, she was so friendly and helpful and couldn’t have done a better job at helping me with my claim. Very happy.

HUDGELL SOLICITORS are great lawyers whit amazing customers service. I got pretty good deal only because of them I'm quite happy I chose Hudgell solicitor.